This is Scientific American's 60-second Science, I'm Susanne Bard.
Near the end of the 18th century, the industrial revolution began to transform Great Britain. Machines replaced hand tools, factories sprouted up in cities and towns, and a sharp uptick in coal combustion polluted the skies. The industrial revolution, and the pollution that followed in its wake, soon spread to the rest of Europe. But some of the smoke and ash didn't stay there. It also drifted into the upper atmosphere and was blown by winter winds all the way to the frigid Himalayas.
"This ash was transported for thousands of kilometers. And eventually, it was deposited with the snowflakes."
Environmental scientist Paolo Gabrielli of the Ohio State University. His team found signatures of airborne pollution from the beginning of the industrial revolution in Tibet—specifically, in ice cores taken from a glacier nearly 24,000 feet above sea level on Mount Shisha Pangma. Such ice cores are like time capsules that contain a record of the contaminants that were mixed in with each year's snowfall.
"And we are able to count annual layers from the surface down to a depth, in this case, of even more than 500 years, covering a time period between the year 1500 A.D. to 1992. At the beginning of our record, we didn't observe any kind of anthropogenic contribution in our ice. And this lasted until about the year 1780. At that time, we start to observe an enrichment of some trace metals." 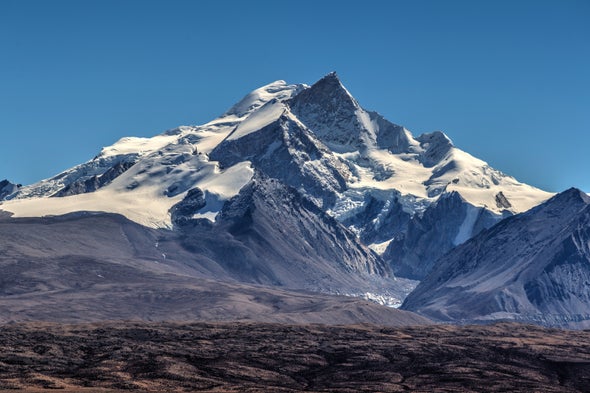 These metals included zinc, chromium, nickel and cadmium.
The industrial revolution also coincided with a rapidly growing global population. The increased demand for food led to the expansion of croplands. Gabrielli thinks that the practice of burning forests to clear land for agriculture may have also contributed to the trace metals found in the ice cores.
The study is in the Proceedings of the National Academy of Sciences.
This finding is not the first time ice cores have revealed signs of human pollution from the past. A previous study showed that a glacier in the Andes Mountains of South America bore traces of toxic elements like lead and arsenic, deposited during colonial silver mining operations in the 16th century, more than 200 years before the industrial revolution.
"We have contaminated even the most remote areas of the world. And so, at this time, there is most likely no glacier on earth that does not show a trace of our presence."
Thanks for listening for Scientific American's 60-second Science. I'm Susanne Bard.